Wildlife in the Klamath-Siskiyou Mountains

An extremely diverse and varied region

Although well known for its incredible floral diversity, the wildlife of the Klamath-Siskiyou region is also extremely diverse and varied. From the highest peaks to the rugged canyon bottoms, wildlife abounds in the Klamath-Siskiyou Mountains including numerous rare and endangered species, and endemic species found nowhere else in the world.

Below is a small sample of the wildlife species found in this spectacular region. Klamath Forest Alliance works to defend these species, by protecting their habitat and by working to maintain both source populations and important connectivity corridors throughout the region. 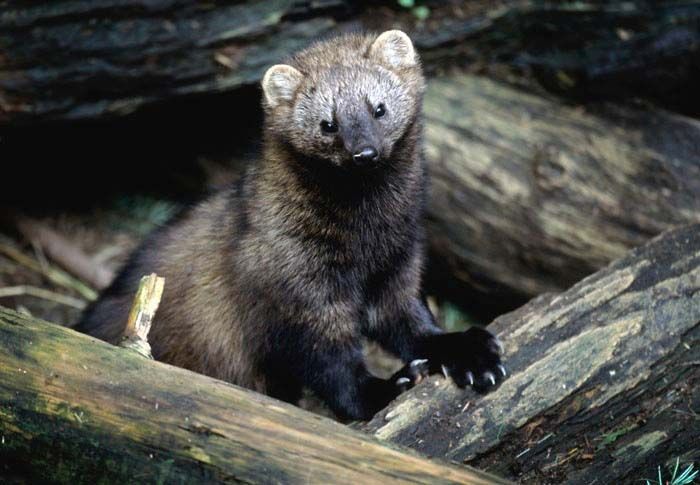 The Pacific fisher is an elusive and secretive species that although once abundant throughout large swaths of North America has been dramatically impacted by trapping, habitat loss associated with logging, and the use of rodenticides by homeowners, farmers, and illegal public land marijuana operations. Populations on the West Coast have been particularly hard hit, with only two populations of Pacific fisher surviving in their native habitats.

One small population of Pacific fisher exists in the southern Sierra Nevada Mountains and another far more robust population exists here, in the vast low elevation forests of the Klamath-Siskiyou. Although currently, the Klamath-Siskiyou Mountains are the stronghold for the Pacific fisher on the West Coast, only the southern Sierra Nevada population is adequately protected as endangered, under the Endangered Species Act.

In the Klamath-Siskiyou Mountains, the species utilizes mature or old-growth mixed conifer forests for denning, resting and producing young. Large hollow trees, cavity habitats, and mistletoe bromes most commonly found in old-growth trees are important denning and resting structures for the Pacific fisher. Although dependent on complex forest habitats at low to moderate elevation, the Pacific fisher utilizes a wide variety of habitats for foraging and dispersal. This ability serves the Pacific fisher well in the Klamath-Siskiyou Mountains, where the largest native populations on the West Coast reside in a highly diverse patchwork of forests, rock outcrops, hardwood groves, oak woodlands, and patches of chaparral.

Thus far, the politics of big timber have precluded endangered species act protections for the Pacific fisher in our region, but conservationists are working to change that. Klamath Forest Alliance regularly works to protect Pacific fisher habitat in northern California and southwestern Oregon. 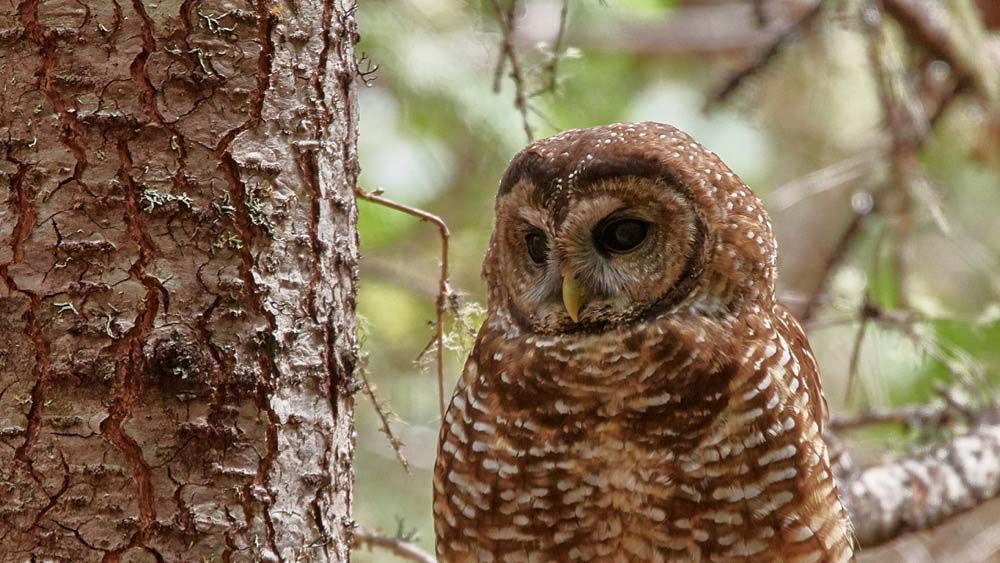 For many decades, Klamath Forest Alliance has been at the forefront of the movement to protect the Northern spotted owl. Currently protected as threatened under the Endangered Species Act, this species is rapidly declining throughout its vast range in Washington, Oregon and Northern California. Virtually extinct in large portions of the Coast Range and the Cascades Mountain in Oregon and Washington, for many years the Klamath-Siskiyou Mountains were considered a strong “source” population needed to support species recovery and dispersal into regions where the owl had declined more rapidly. Yet, in recent years populations even here, in the Klamath-Siskiyou Mountains have dramatically declined, leaving the species dangerously close to extinction.

For many decades, Klamath Forest Alliance has been at the forefront of the movement to protect the Northern spotted owl.

Klamath Forest Alliance works regularly to protect Northern spotted owl habitat across the region and supports the movement to increase protections to “endangered” under the Endangered Species Act. The Northern spotted owl is emblematic of the decades long struggle to protect old-growth forests on the West Coast and all the species that depend on them. Klamath Forest Alliance has been, and will continue to be at the heart of the struggle to protect, maintain and restore this incredible species. 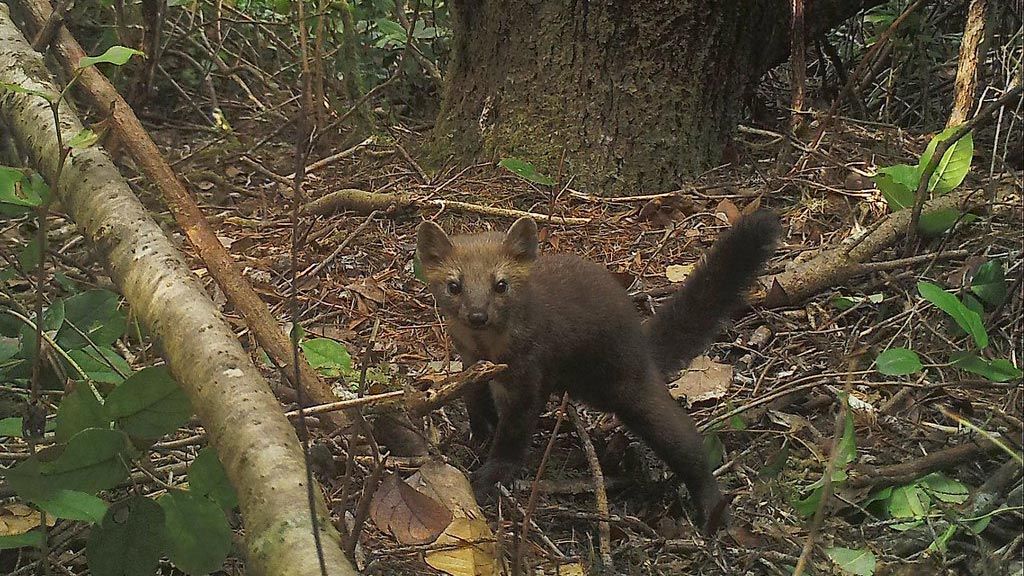 The secretive and seldom seen Humboldt marten is endemic to coastal northern California and adjacent southwestern Oregon. Utilizing a wide variety of habitats including old-growth redwood forests, coastal mixed conifer forests, serpentine pine forests, areas of dense coastal shrubbery and dune forest habitats, the species is so rare, that until recently the Humboldt marten was thought to be extinct. In recent years, small populations been rediscovered in the western Klamath-Siskiyou Mountains and the Coast Ranges. Currently, it is estimated that less than 100 Humboldt marten are found in remnant populations in Northern California and Southern Oregon.

Protected as a “threatened” species under the Endangered Species Act, the Humboldt marten and its small regional population was likely significantly diminished by fur trapping, and later by extensive habitat removal in the moist old-growth conifer forest the species often calls home. Klamath Forest Alliance works to protect Humboldt marten habitat and existing populations by advocating for the protection of its primary habitats, existing populations and important connectivity corridors. 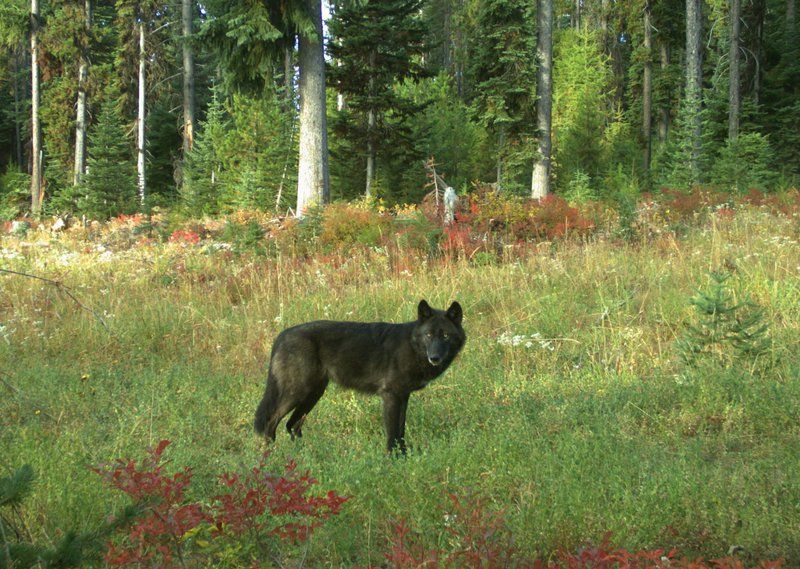 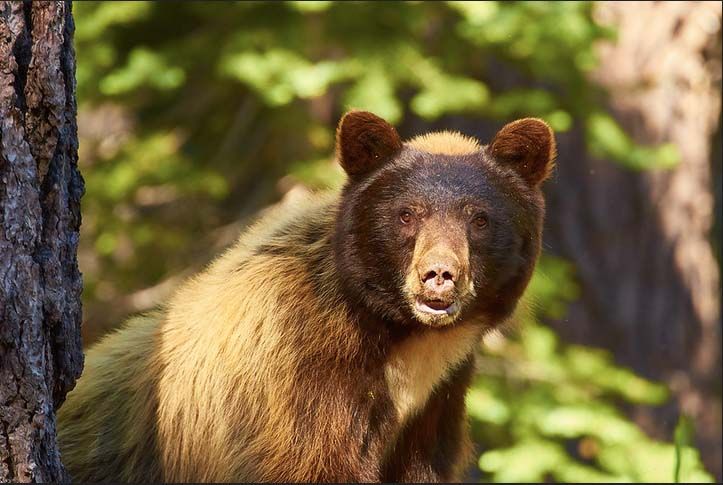 It is thought that the Klamath-Siskiyou Mountains have the largest populations of black bear in both the state of Oregon and California. Found from the deep river canyons to the highest of mountain peaks, black bear are generalist that utilize nearly every habitat in our region.

It is thought that the Klamath-Siskiyou Mountains have the largest populations of black bear in both the state of Oregon and California. 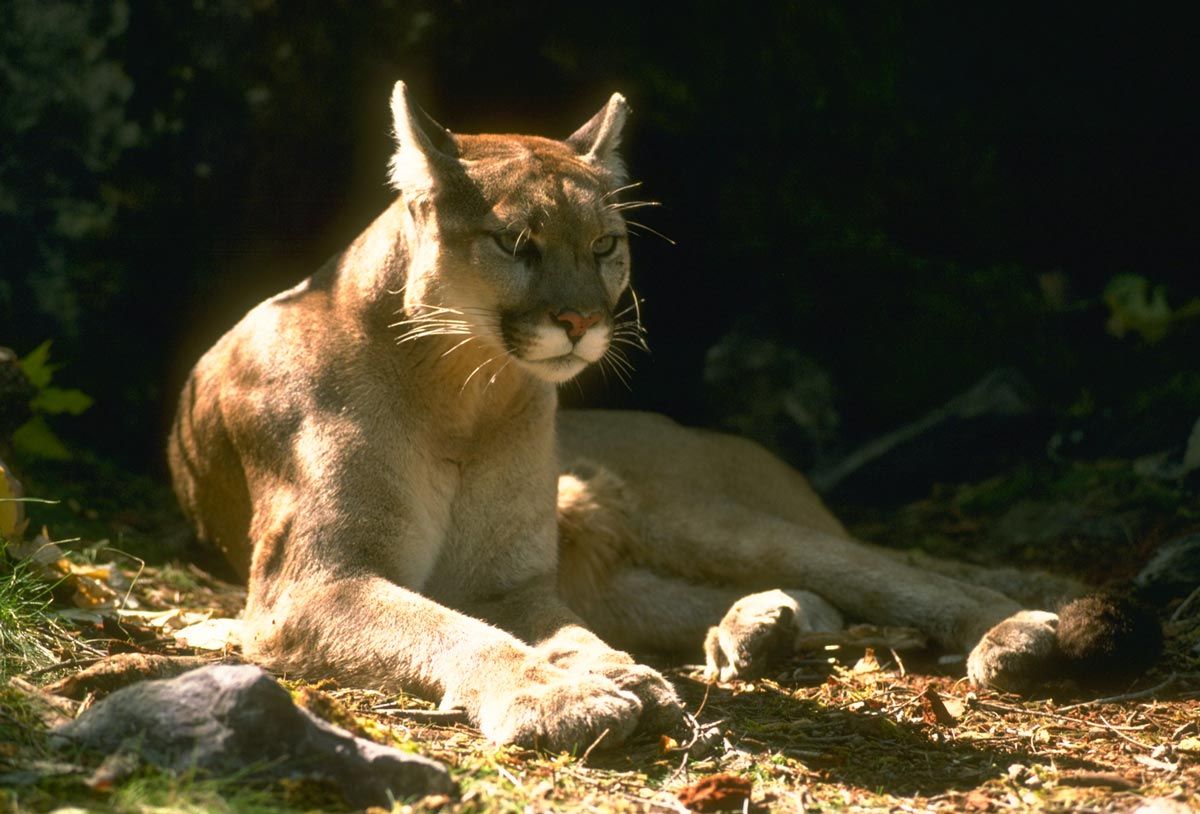 Although stealthy and seldom seen, the Klamath-Siskiyou Mountains support some of the largest cougar populations on the West Coast. In fact, the region’s  isolated, inaccessible terrain and remote mountain habitats have long been a refuge for this heavily persecuted species. In fact, by the 1970s, the cougar was almost extinct in Oregon and northern California due to hunting, trapping and purposeful attempts at extermination. Yet, the cougar managed to maintained viable populations in the remote reaches of the Klamath-Siskiyou and in other isolated mountain regions in northeastern Oregon. Overtime, these isolated populations have expanded and dispersed, repopulating large portions of the species historic range.

The role of far ranging carnivores, like the cougar is vitally important for the ecology of our region and at Klamath Forest Alliance we work to support and maintain viable carnivore populations throughout the region. 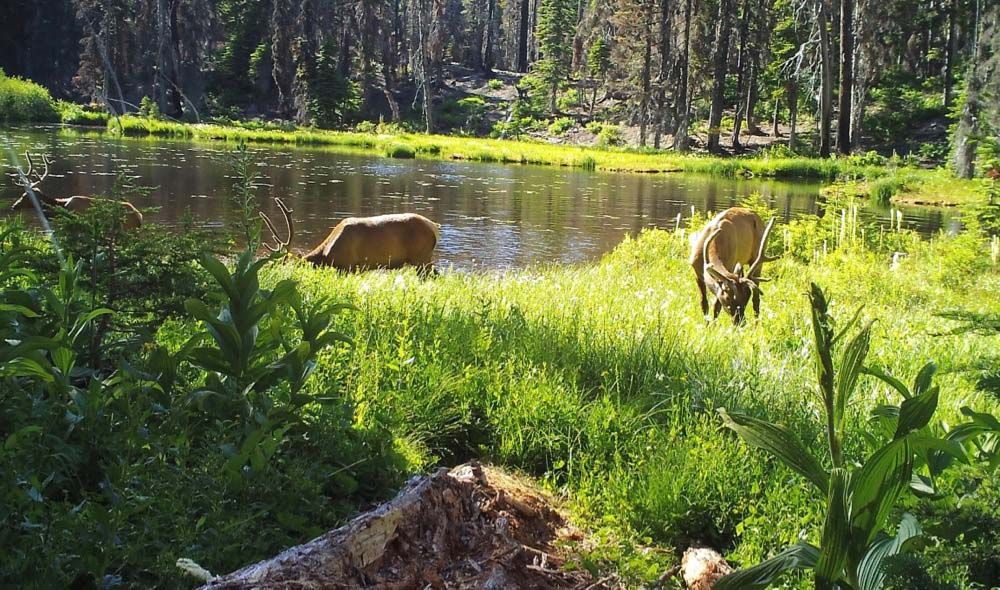 During the mining and settlement era elk were heavily hunted for food and for their hides. In fact, large bands of “hide hunters” historically traveled throughout the Klamath-Siskiyou Mountains killing whole herds of elk, skinning them for hides and letting their carcasses rot where they were killed. Through this process of excessive hunting, elk were largely extirpated from the Klamath-Siskiyou Mountains by the early 1900s and populations are still in the process of recovery.

On the Klamath River watershed, elk were re-introduced in the 1980s and have thrived in the areas remote forested habitats. Shy and reclusive, elk tend to overwinter in remote, inaccessible watersheds throughout the region. They also roam far and wide in the summer months, utilizing habitats throughout the high country of the Marble Mountains, the Trinity Alps, and the Siskiyou Crest. 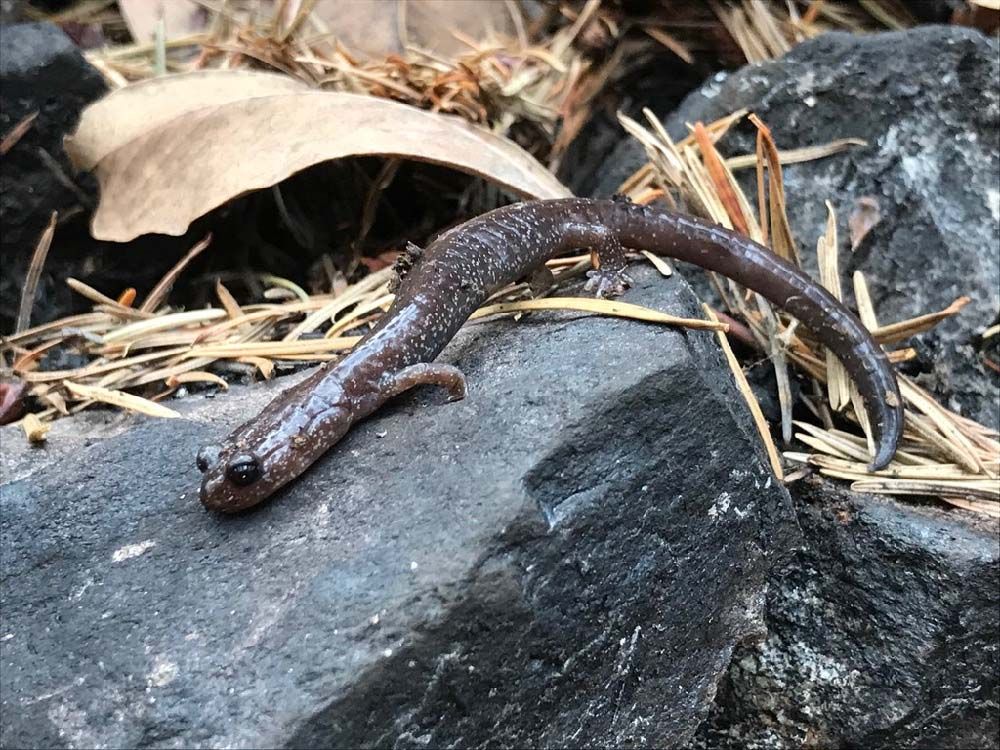 The Klamath-Siskiyou Mountains support an unusually high concentration of terrestrial salamander species including numerous endemic species found nowhere else in the world. Isolated by steep mountains and swift flowing rivers, over vast periods of time this isolation has created numerous narrowly endemic species found in the different watersheds of our region.

Unassuming and almost never seen, terrestrial salamanders embody the unique biodiversity and the mystery of the Klamath-Siskiyou Region.

The transitional nature of the region also hosts numerous species found more commonly in the Pacific Northwest and at the southern extent of their range, as well as species from the woodlands and forests of California and at the northern extent of their range. This combination of endemic species and species from both California and the Pacific Northwest creates an unusually diverse assemblage of terrestrial salamander species.

Unassuming and almost never seen, terrestrial salamanders embody the unique biodiversity and the mystery of the Klamath-Siskiyou Region. Klamath Forest Alliance works to protect their mature forest habitats and increase protection for these incredible species. 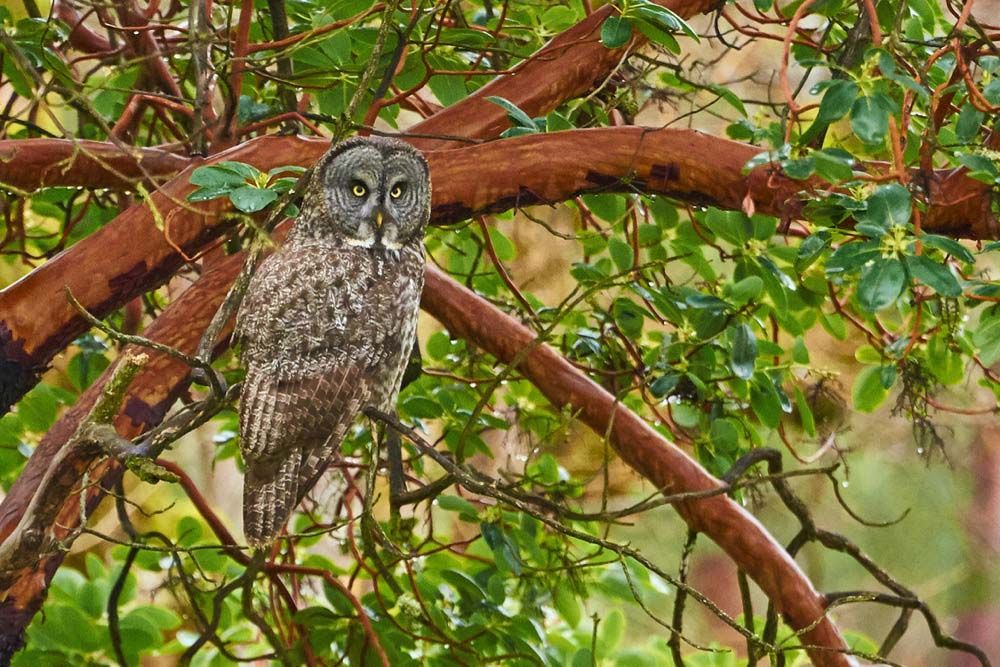 The Yurok Tribe is also working to re-introduce the California condor who will soar the skies of the Klamath-Siskiyou for the first time in over 100 years. 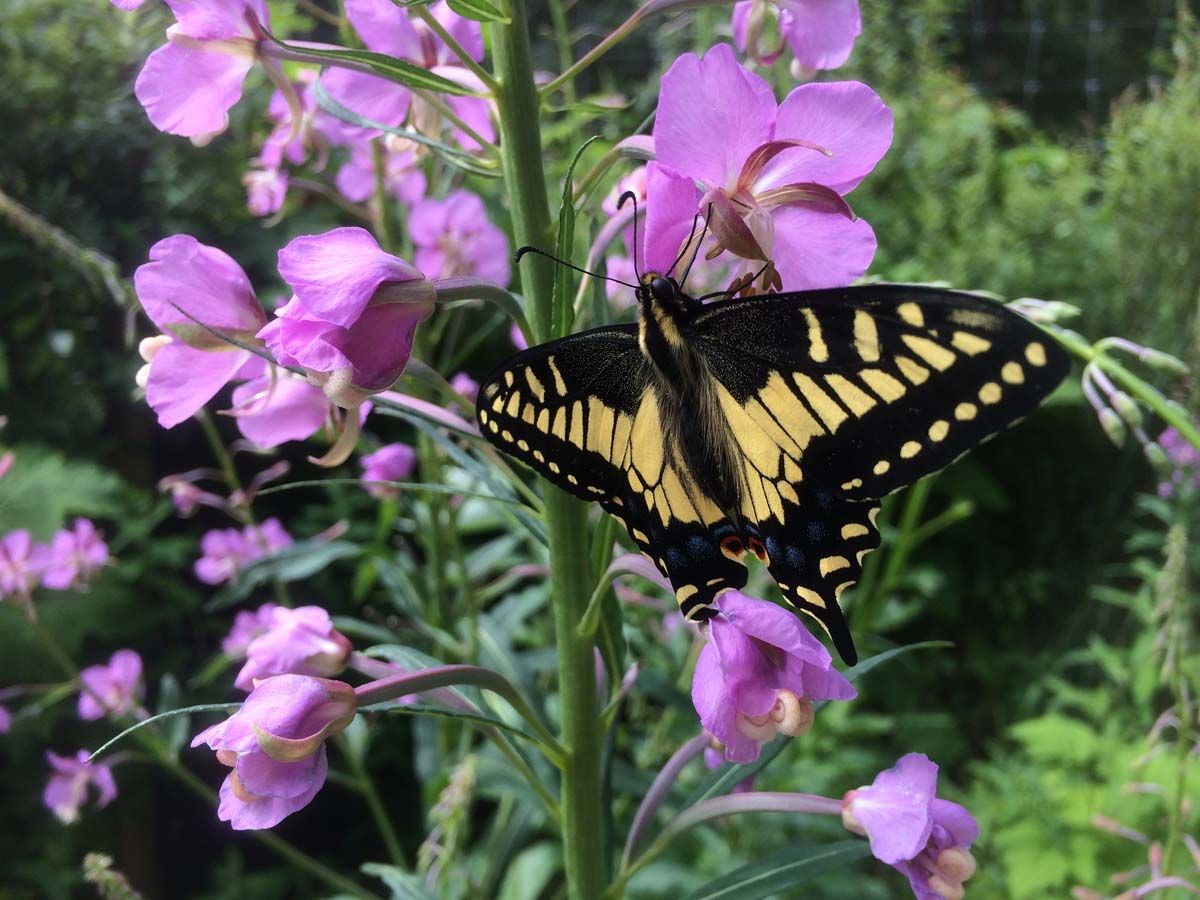 Due to the unique botanical diversity found in this region and incredibly wide variety of plant communities and habitat types, the area also contains extremely high levels of pollinator diversity. This includes 141 species of butterflies and unusually high levels of native bumblebee diversity. The area also supports pollinating moths, beetles, hummingbirds, ants, and other insects.

The Franklin’s bumblebee is endemic to the Klamath-Siskiyou Mountains and has the most limited geographic distribution any any bumblebee in the world. Last seen in the wild in 2006 at Mt. Ashland on the Siskiyou Crest, the Franklin’s bumblebee has only recently been listed as endangered under the Endangered Species Act. Other species like the Western bumblebee have also become extremely rare, but can still be found pollinating wildflowers in the Klamath-Siskiyou region.

Unlike, the geographically restricted Franklin’s bumblebee, the extremely wide ranging and critically imperiled western monarch butterfly has also dramatically declined in recent years. Once common throughout the West Coast, the species is now rare across its range, where populations have declined over 90% since the 1980s. The western monarch butterfly uses the Klamath-Siskiyou Mountains seasonally, utilizing milkweed (Asclepias sp.) as a host plant and nectaring on a wide variety of flowering species. Although too far north to provide overwintering habitat, the Klamath-Siskiyou is an important stop in the western monarch migration corridor.